Chincoteague ponies of Assateague and Chincoteague are world famous and have been the subjects of hundreds of books and articles.
HOME 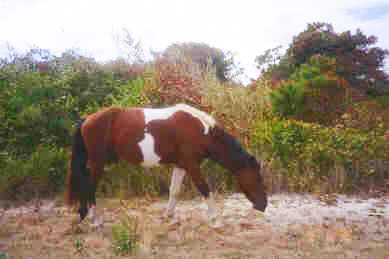 The ponies of Assateague and Chincoteague are world famous and have been the subjects of hundreds of books and articles. The most famous of all is "Misty of Chincoteague" which has become a children's reader for decades. The following lists the many places where you can find out about the ponies that live in the wild.

History of the Chincoteague Ponies

Because the Island is so remote, during the 1920s two fires devastated the Town of Chincoteague. In May 1924, determined that these events would not happen again, a small group of men organized the Chincoteague Volunteer Fire Company.

By passing the hat, a sum of $4.16 was acquired and the fire company was launched. Mr. LeRoy Conant was elected president and Mr. Elba Jones, fire chief. 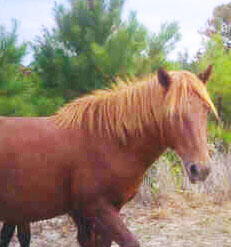 At this meeting, the men discussed efforts to buy an American La France pumper (capacity 750 gallons) and 2,000 feet of hose. They opted for this purchase in June 1924. In order to pay for these pieces of equipment, the firemen held their first carnival, which included a "Pony Penning Day." The proceeds were used as the initial payment on the equipment.

With the exception of the war years, between 1942 & 1943, the carnival and the penning have been sponsored by the fire company every year since its organization. That will make the 1998 Event the 73rd Annual. All money realized from these events is used to carry on the work of the volunteer company.

There are many "legends" concerning the origin of the ponies. One is that the ponies are descendants of ponies that swam ashore after a Spanish galleon wrecked off the coast of Assateague Island. Another is that the ponies are descendants of the horses put ashore by Spanish pirates. The U.S. Government maintains the ponies descend from domesticated stock that was grazed on the island in the 17th century by Eastern Shore planters seeking to avoid mainland taxes and fencing requirements.

Whatever their origin, ponies have played an important part in the development of the the islands. They were used for transportation and work up until the early part of this century.

Since the 1930s, the ponies have survived storms and diseases. They are deemed by the Federal Government as the only wild herd still grazing east of the Rocky Mountains. Currently, there are two herds of horses on Assateague Island separated by a fence at the Maryland-Virginia Border in the middle of the Island.

The Northern, or Maryland herd, is managed by the National Park Service. The Southern, or Virginia herd, is owned by the Chincoteague Volunteer Fire Company.

The Southern herd is rounded up each year for the annual Pony Penning and Auction. After swimming across the bay between Assateague Island and the Town of Chincoteague on Chincoteague Island, the ponies are driven down Bunting Road to Main Street and then north to the Firemen's Carnival Grounds, where they penned and cared for. After the auction, the unsold colts are driven back to Assateague Island to the Chincoteague National Wildlife Refuge -- to survive another year in the wild.